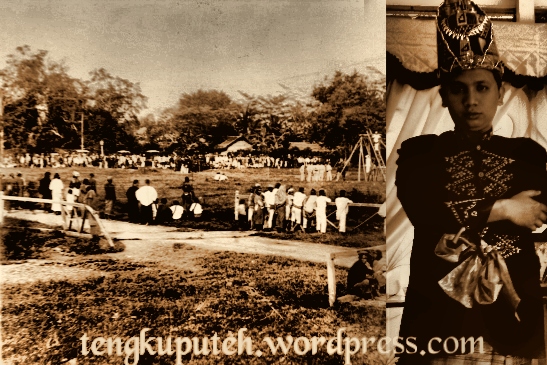 Turning faintly of the ocean, I transformed into a line of names.

In the year 1620-1630. The Portuguese in Malacca were confronted by Aceh Darussalam and Johor. Dutch in Batavia in the face by Mataram and Banten, while the Spanish in the Philippines faced by Ternate and Tidore. The Western foreign powers, the Portuguese, the Spanish, the English and French interchanged with each other, but the powers of the archipelago themselves were unable to mobilize unity of the struggle to confront it, even to each other. This is a story about the situation before the Dutch came out as the sole winner in the oceans and the archipelago. A story about the attack on Aceh to the Portuguese-controlled Malacca.

His Majesty Sultan Iskandar Muda handled the preparations for the Malacca invasion. As a soldier, I look at what is being prepared. Yes, I was really amazed to see the fleet of the Sultanate of Aceh Darussalam, which the king described as an “unbeatable” fleet. Our ship will depart from Bandar Aceh is very much, not to mention who will join from other ports on the east coast of Aceh.

Finally, according to the calculations of the fleet, we set out, consisting of ships war and ships carrying land-soldiers. I was on one of the boats. Not too big, but incredibly lively, because of the number and the oarsmen of choice. From this ship I can witness the largest ship where the Majesty Sultan Iskandar Muda is located, The Portuguese named her Espanto del Mundo. To the ship, the Sultan gave her name Cakradonya. How not! The length of 100 meters, erect three mast stands that Look like coconut trunks only. At a glance, I counted there were about 50 different types of cannon guns on each stomach. Yes, I can not imagine what it would be if all the guns were fired. In the middle of a voyage to Malacca, I mused.

Throughout the voyage. I imagined Sultan King Iskandar Muda must be smiling. We believe that Malacca will fall into the hands of Aceh. As our dream as another son of Aceh is to seize Malacca. Expel Portugal forever from Southeast Asia.

Malacca Attack (Portuguese) by the Sultanate of Aceh Darussalam in 1629

The year 1629. The hundred-ship shipwreck finally arrived. The cannon shells from the Malacca fortress can be offset by gun shots from Aceh’s fleet ships. Troops have been landed. The city of Malacca has been occupied and remains the fortress of Malacca.

For the first time, I felt, maybe I would die in this battle. The battle of the sea grew horribly, the ships burned, falling apart, and drowning around the Great Ship of Cakradonya. It looks like we’re going to lose. Sultan Iskandar Muda has ordered the ship to turn.

I ordered our ship to protect Cakradonya backward movement. Yes, I Ahmad determined to be part of the history of the Sultanate of Aceh Darussalam expel the Portuguese from the earth and the waters of the archipelago. And if we had to lose today, then there would be another day. Sultan must be saved, to build strength again. I’m willing to die today. Allah is the Greatest!

The attack from the rear by the Portuguese fleet had overwhelmed us, coupled with the betrayal of Johor who was more willing to cooperate with the kafir. There appeared to be hundreds of bodies of soldiers from our side and the opponents floating on the reddish Strait of Malacca.

My tears dripped to see the fresh blood bands of comrades flowing from the shattered bodies of the ship, accompanied by the cries of shouting cries, the terrifying screams of the shoot-out soldiers, and the grievous moans of the severely wounded.

“Forward Aceh!” I yelled. Twoaaar !!! It felt like I felt some bullets pierce my chest. I fell into the sea, then twisted, and turned upside down. There was a faint sound that his Cakradonya had escaped from the siege.

I smiled, see you, Sultan. Having finished my devotion in the world, it is time for me to account for all my actions in the world to the God. My chest tightened by bullets and seawater filled the cavities in my lungs. For the last time, before death picked me up I recited. “Asyhadu an-laa ilaaha illallaah Wa asyhadu anna Muhammadan rasuulullaah.” I testify that there is no god but Allah and I bear witness that Muhammad is the messenger of Allah.

Turning faintly of the ocean, I transformed into a line of names.

hi The extent of Aceh Sultanate during the reign of Iskandar Muda, 1608–1637. Source Wikipedia

The attack on the Sultanate of Aceh Darussalam to Malacca (Portuguese) in 1629 failed miserably. According to Portuguese sources, the entire Aceh fleet was destroyed by the loss of 19,000 troops. After the defeat, Sultan Iskandar Muda sent two other great sea expeditions. In 1630-1631 and 1634, to crush the rebellion in Pahang. During the time of Sultan Iskandar Muda, the Sultanate of Aceh Darussalam controlled the entire northern part of Sumatra Island and the northern region of the Malay Peninsula.

27 Responses to DUSK IN MALACCA