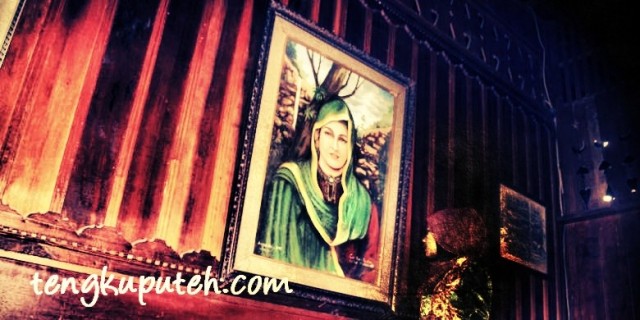 The heroism of Cut Meutia was obtained at an expensive price, his life. There is a tragic story that we may not see again, a story whereas the children of this nation, shed tears when reading it. The story of the killing of Cut Meutia at the hands of Dutch troops on 25 October 1910 in Pucok Krueng Keureuto, North Aceh.

Sgt. Mosselman, a prominent brigade leader in guerrilla warfare, reported that on October 22, 1910, he was assigned to trail the troops of a herd allegedly in Lhok Reuhat and on the third day he found a new footprint on the branch of the Krueng Peutoe river, despite Acehnese guerrilla forces Has tried to eliminate it.

“… The farther down the river, the wider the river, the more heavier and the greater. The mountain boulders grew more and more and there were more small meters of water, glassy slippery stones where the water flowed continuously on the carbines and other equipment. After a long climb and waiting for my friends to observe all the circumstances around him, then at about 4 pm, not far ahead of me, I saw a cloud of smoke rolling in the air between the wooden trees. Again the hairs on my neck stood up, a sign of a human being, if he was in danger.

I try to keep the spirit of my men and move forward. What I am left with is the chosen members. However, it is difficult to achieve such a feat of strength. Just marsose Manado Mahamit, nrp 68750 and marsose Java Tarmin, nrp 71065, a very nimble boy from Malang who hides behind a boulder, then turns me and every member of the climbing marsose can see the cues I give.

They are dangerous, Marsose troops. Dutch pride, they are capable subordinates.

After we got together I ordered the troop members to release their rucksacks. When I was about to creep into the forest to see the terrain more clearly so that I could take the best course if I wanted to do a reconnaissance or ambush, suddenly a member of my squad called out: “There!” In the direction called about 200 meters from us seen the people of Aceh are running to a groove. We are unlikely to ambush and only speed can deliver success. “Attack …!” n a moment of lightning run to our seven forwards, to a groove where the man had run away. Despite falling on the rocks but we continue to advance and just stop at a child’s groove. At a distance of approximately 150 meters from the estuary of a groove we encounter a cottage that is being done in abandoned circumstances and its supplies. I wailed, but no one was able to follow me. Together we arrived at the cottage and the three of them stormed into it. After a 200-meter run we came to a sharp tackle line and faced several opposing men, about 30 meters who were trying to cross the river channel. Mamahit who was in front of occasionally pointed to an old man who was escorted by three men to escape into the forest. He fired a shot at the old man who was right on his target and then the old man collapsed.

Immediately raging shoot-out. The three of us were fired at in a very close direction, from the edge of the groove, from the forest, from all directions. Instantly our view of the three met, really mad, that at times like that we both need to look at each other. I think, (then say also Tarmin and Mamahit what they think it is), that the last moment has come for us. It turned out that we had a great success. I jumped into the water in the groove, while behind us stretched the steep hill wall. We stand in the water to the stomach or literally, with our backs against the wall.

We were completely exhausted and fired like a whale blast. We can hardly shoot. The opponents of the opponent scattered before us in the shrinking waters of the hill wall behind us, all misses, but our shots were the same. In panting it is not possible to fire the right shot. In short we have to calm down, to do the raid is not possible because I know very well, that we are now in the midst of opponent forces. Therefore we must strive in this place, if we are hit by opponent bullets, to sell our lives at a price as expensive.

The opposite seems to be panicking. We felt lucky to have calmed down before they could attack us.

An invading gesture was given by a lean woman, yellow-white face with loose hair, swung her machete as her yelled that suddenly attacked from the forest. Her fell down like all the other young men who followed in his footsteps by a shot that hit his head as he stormed a few feet in front of us.

The sound of gunfire rumbled again, even more terrible than before. I sensed that the opponents were getting closer to us. What a critical thing at all while I still have not seen one of our troop members. Then they doubt the actual scene, even though the sound of the gunshots is so hectic! When at first there was a terrific fire on the backs of the opponents. That is a tactic! And really, if they appear like water droplets, the one on the groove, it would be less interesting, then it is certain that we all have names.

The three of us cursed in three languages. Mahamit interrupted his Manadon accent. From the mouth of Tarmin among the “typical” Javanese, I heard repeatedly the words “dog” and “pig” in each shot. The sound of gunfire resembled a thundering music in our ears and suddenly, somewhat obliquely in front of us, in the cracks of the gunfire, came the screaming of people: “Go forward, smite marsose!” Opponents thought that they had been surrounded. Does not it make sense, that the Dutch just sent three marsose men deep into the forest.

The eruption of the shot was somewhat stalled. The shouts of “Allah il Allah” slowly sounded lethargic and suddenly we were five of us with Wakary and Sinkey jumping from the edge of the grove overgrown to the bottom of the groove, storming into the forest in front of us which I suspect the opponent’s place is hiding.

In front of us lay an elderly man whose friend had been hit by our bullets. From behind huge boulders jumped two young men swiftly forward. Each of them protects the old man’s body with their body, wielding a machete in his hand. Both of them had to be killed with our machetes. When I stepped on it I saw that the old man had died. He lies on the ground in a state of motion regardless of the things that happen to him. For a moment I saw the gold-plated weapon, the famous “keris” weapon and suddenly flashed through my head that it must be a sacred person. This is evidenced by the sacrifice of the two young men who actually face death in a hero.

We are not yet time to rest and continue to storm into the forest. Opponent gunners will not wait for us. Only someone has recorded us with a glance from behind a log. I saw a big mole near his nose, a terrible feeling aroused me when my machete flew over his neck.

As I tell this story now I feel as though it was only yesterday that I experienced it even though it was over 27 years ago. I still see the look of that yellow white woman with her intelligent face, fueled by her burning feelings to die as a martyr. With wild eyes and hair loose on his head, which swung a machete attacked us. Did she get tired of his escape? What was her act, so it occurred to me later to know who she was, for the sake of her son? We did not see her son at all, the young men who carried the old parents with their unshining eyes (the cleric was later identified as Tengku Seupot Mata) were the youngest members of the opponent.

For one person there may be no limit to the suffering she can endure, but there is suffering to bear. Her second husband was sentenced to death, the third (Pang Nanggroe) was shot too, a persistent pursuit addressed to her, A terrible suffering in his life, constantly escaping, probably because of his fate following her, crossed her mind: “God’s will” All the worship and praise of her, who determined His time and with His permission also made me the cause of her death.

It is therefore not a certainty, that the woman bought her death with confidence to meet those who had preceded it? Both she and Pang Nanggroe are people who do not know, what he said later, “mel” (= Report)! Those who are young will tell later in various mosques, that they have been martyred in 1910 … “