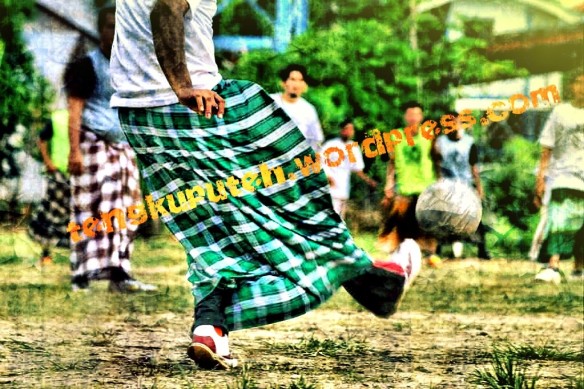 People “sarungan” all over Indonesia, unite !!!

So this story begins with a sentence, in ancient times. An unknown genius finds a very precious object: a sarong. The shape, a hundred square centimeters of fabric, various shades, two edges linked lengthwise. The English call it sarong and certainly imitate the word Malay, “sarung”. Although they are reluctant to use it.

The British consider it an impractical dress. No matter, the British “practical” size is different from us. For us, sarong precisely a technology appropriate for all benefits. We can wear it for prayers to the mosque or wedding party, make to the latrine, make a cold blanket, protect from the heat, can be a mask. In a state not as a clothing, a sarong can be a wrapper or book, for example when we move house.

But something has happened to the sarong. Perhaps because also the experience of a culture always has a changed social relations. Sarongs, which can be both elegant and casual as Calvin Klein designs, are now receding into something very private, just for the bedroom, in the bathroom, or for prayer. The only chance when a sarong comes into the public sphere is when going to the mosque, on Fridays and festivals. The rest, he just a troublesome ornament.

It is not surprising, then, that a sarong can be a symbol of something shrunken natives, something “people” but urgent, something that suits the environment but is threatened by the flooding modernization flows. Slowly, finally, sarongs also become a symbol of modest independence in the face of the fake plastic-fisted cement.

A bit strange is the history of sarongs. There was a time when he became the identity of a mocked layer. At the beginning of the Soeharto regime in Indonesia (1965-1998), there was a slogan warning to be wary of “sarongs”. No specific who, but immediately the phrase becomes clear.

At that time, the tension was felt but rarely spoken, between abangan, with the marginalized (santri) on the one hand. And as a periphery, the santri who dressed in sarongs for a long time were not the people who were heard in the cultural arena. They are “hicks”.

Time certainly changes the dispute. Perhaps “hick” things are now being weighed again and by social, economic or political change even appreciated. However, (as a diligent reader), I never forget the story of Doel on Lebaran day in Aman Dt Modjoindo’s book, this Betawi boy, with all the dreams of a village boy, trying to wear a hat and tie. But his knees, the fierce teacher of the Koran, sprayed him. Si Doel returns wearing a sarong, but his heart is crushed. This romance was composed in the Dutch colonial era. We know where Aman, author of Balai Pustaka which is controlled by the O.K & W Department is (forced) to take sides. The Dutch colonial government clearly “hates” the sarong.

In the third world, most of the colonized peoples, the history of clothing is indeed a history of a cultural and political clash, which sometimes erupts loudly sometimes like lava in the belly of the mountain. In Turkey, to modernize his people, Mustafa Kemal cut the turbus off the heads of many people. In India, as well as to liberate his people, Gandhi maintained the results of the khadi industry. In Indonesia, sarong has also become a socio-cultural item in an era of transition. It is also a point of conflict.

We can see it, precisely because it is versatile, as a sign of our limitations. But we can also, on the other hand, as well as other times, see it with a sense of miss. We can be a snob who scoffs at it as a sacred item. But we can also hoist it aloft, just so as not to be equated with the glamorous rich.

Therefore we love sarongs, the tools that always exist in the ruling house, or the commoners.

5 Responses to HISTORY OF SARONG