ISLAMIC SHARIAH WHO IS AFRAID, A CASE STUDY IN ACEH 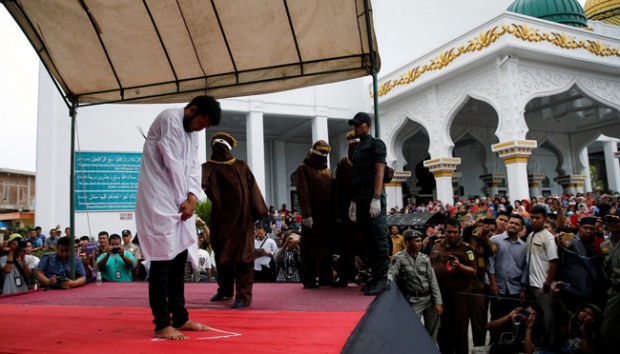 A man convicted of same-sex relations receives a caning punishment in Banda Aceh, on May 23, 2017. Approximately 1,000 people witnessed the legal process of the whip. REUTERS

ISLAMIC SHARIAH WHO IS AFRAID, A CASE STUDY IN ACEH

On Tuesday, May 23, 2017. Two men a pair of gay at the whip in the yard of Lamgugob Mosque, District Syiah Kuala. They are convicted of sexual misconduct. They were caned 83 times. The sentence is reduced 2 times or two months of detention, according to the judge’s verdict.

The international world was shocked. “Whip and criminalization of same-sex relations are a striking violation of international human rights law,” said Amnesty International Deputy Director for Southeast Asia and the Pacific Josef Benedict.

“The international community should put pressure on Indonesia to create a safer environment for the gay community before the situation gets worse. No one should be punished for having sex on the basis of likes,” he added.

VOA Indonesia added that Homosexuality is not illegal in Indonesia, but Aceh, the most conservative province in the predominantly Muslim country, introduced anti-homosexual laws in 2014.

There is a lot of international writing and condemnation which contains complaints about the “gradual process of Islamization in Indonesia”. This article clearly informs us clearly how the international world is afraid of the possibility of sharia in Indonesia.

In Indonesia, Islamic Shari’a issues have existed since the formation of this State, the abolition of seven words in the Jakarta Charter is the beginning of a series of other events that follow behind such days; Great debate in constituent assembly between Masyumi-led Islamist camp, NU and PSII with Nationalist and Christian’s camps backed by PNI, PKI, IPKI, Partindo, and Catholic Party; The ratification of the Marriage Bill of 1973 also faced a tough trial in the DPR to finally become Law No. 1 of 1974; And attempts to legalize abortion color the history of the country’s journey.

However, it is not fair that the Shari’a of Islam in Aceh is the barometer of the success of Islamic Shariah in Indonesia. This is based on Aceh has not fully run in many areas in Aceh itself.

Is the implementation of Islamic law in Aceh running smoothly without a hitch? Of course, there’s still a lot of homework to do right away like there’s still little ability to touch things that are substantial and just touch the trivia. Islamic Shari’ah is not just a raid?

On Friday, during the Friday prayer, Khatib said that the current Shariah Islam in Aceh faces many obstacles, but it should not be seen as a problem but look at it as an opportunity or opportunity to improve and establish itself in the Islamic Shari’a. The question will be? Hopefully, only to God, we hope full and whole.

37 Responses to ISLAMIC SHARIAH WHO IS AFRAID, A CASE STUDY IN ACEH