HARLEQUIN AND THE TREE OF HOPE 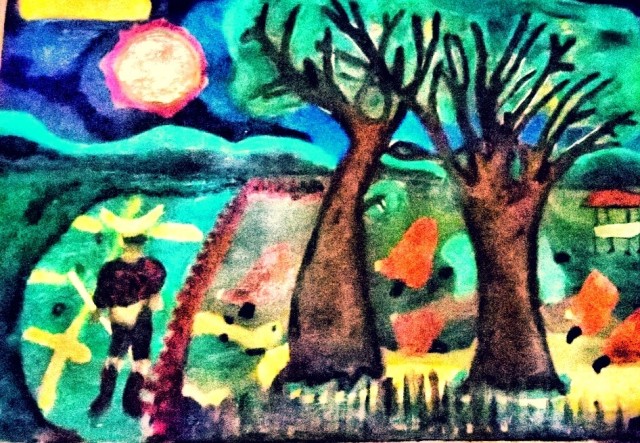 Harlequin, The face of a young man, the face of a lover who is kept away from his lover, by circumstance.

HARLEQUIN AND THE TREE OF HOPE

I know he’s been traveling to strange places in this world, poor as a mouse, as proud as Lucifer. His paintings abstractly depict two brown trees with a sharp sweep of green colors. Rice fields, unlike rice fields. Is it so easy to be an artist now? No attempt to imitate anything, he just sweeps the paint.

When I delivered my criticism, he argued, “This is a decent work, Harlequin and the tree of hope!”

A man who lived in the past, who was muscular but loving. Harlequin, is a servant character from the comic Dell’arte Commedia (Comedy Craft-Free Translation) of Italy, has traditionally been introduced by Zan Ganassa in the late 16th century.

Harlequin is marked with plaid costumes (black red). His role is a kind, nimble and clever servant, often acting to thwart his master’s plans, and pursue his love, Columbina. With intelligence and reason, often compete firmly as well as melancholy. Harlequin inherited the physical agility and quality of the swindler, as well as his name, derived from the mischievous, demonic character in medieval dramas.

In England, in the 17th century, Harlequin appeared on stage telling of the fool. It is routinely displayed as a clown character. Coarse and rough clowns become more romantic.

“Why do you describe it using a mask?

“Is not it because you do not have the ability to paint a face perfectly?”

He laughed, loudly hearing my words. 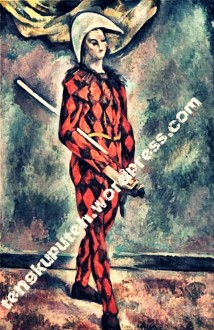 The devil is more realistic ambition, because of the ugly reality.

The name Harlequin is taken from a naughty “devil” or “ghost” in French folklore. The ancient French term, Hallequin, first appeared in the 11th century, by the author of the history of the Orderic Vitalis, which tells of a priest who was chased by demonic forces while roaming the Normandy coast at night. The demons are known as the Hallequin Familia. According to the medieval French version, Hallequin is depicted as a demon envoy, a black-faced exploring the countryside with a bunch of demons to chase the cursed soul from the wicked to hell. This physical appearance explains the traditional color of the black mask of Harlequin’s black. Hellequin’s first stage appearance was recorded in 1262, as a masked and veiled demon, in Jeu da la Feuilliere by Adam de la Halle. The name also appears as a demon, like Alichino in Dante’s work, Inferno. Later this Hallequin character, reinterpreted by Zan Ganassa to become Harlequin’s character as we know it today.

Harlequin is portrayed as nimble physically, agile and performing acrobat that is highly anticipated by the audience. In the early 17th century England became the inspiration of the pantomime drama, even Harlequin in the 20th century influenced the “slapstick” comedy.

“Sorry, your painting is like garbage. I expect better than this, can’t you imitate Leonardo da Vinci?”

“Paintings of beauty, shine and smooth on the outside. You’ve faced life with courage, but you are now at the top. Perhaps you have forgotten, there are people from the lower circle who see the inside of everything. And here’s what’s interesting. “He argued.

“Sometimes there are beautiful things in a pile of garbage, beautiful flowers grow among the garbage. Do not you realize Arlecchino?”

Harlequin as a character in Commedia dell’arte (Comedy Craft), also known as Arlecchino.

I look at the face in front of me. Not too foreign. Akh, I know now! That’s my face before life makes me prosper. Eager, adventurous. The face of a young man, the face of a lover who is kept away from his lover, by circumstance.

He shook his head, like reading what I was thinking, he said “Not so my best friend, I am you who is now. You are the future. I am Harlequin (past), while you are (the tree) of hope. We’re in a painting, a catalyst.”

I’m silent, I feel the resonance. The natural point, that the point when a force meets that natural point. Feeling able to understand his feelings, an artist’s feelings toward other artists, someone sentimental towards a real lover, an ordinary person against a genius.

He painted with a longing feeling, the figure of a distant lover, visible figure cloudy Columbine silhouette, was hugging the moon. In my eyes, the painting looks (so) beautiful.

I became him, Harlequin. When he looked up, the black red man, (had) disappeared.

5 Balasan ke HARLEQUIN AND THE TREE OF HOPE