THE FATE OF THE PAWNS

Posted on 4 Oktober 2017 by tengkuputeh 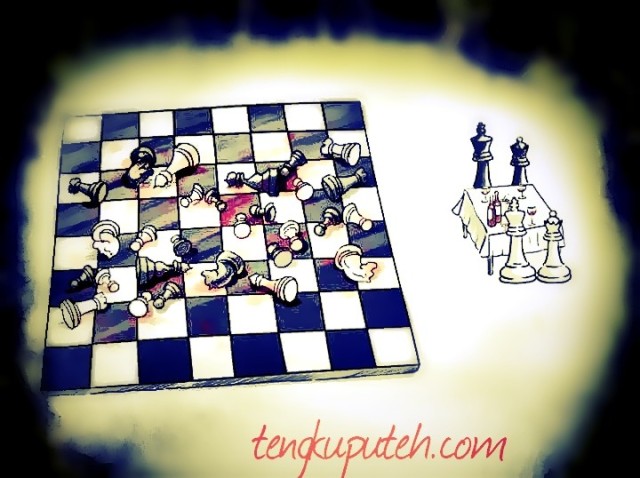 He is often used as a shield or a victim in combat.

THE FATE OF THE PAWNS

The pawns in black and white uniforms stared at the game with a burning spirit. In all their games at most, its a position is placed in the frontline can black can white. Go step by step to face the opponent. In the first step he can advance 2 steps and nothing is hampering this path. Next up is a steep road full of bloody smells of blood. He, who can not back down, keeps on going even though death awaits. The goal is to become an officer, the result of a struggle.

In front of the battle is certainly difficult, in limited steps he strikes just by crossing. The rest waited to die, one by one. In the battle that he said was fair but also actually unfair. He is often used as a shield or a victim in combat.

He who must know himself must be ready to become an officer as well as protect the king or pave the way for the other pieces. He can get a promotion when he reaches the last box on the opposite side, something his hopes are affordable but only a miracle can achieve it. He can replace the officers who first killed by the opponent, except the king. In probability theory, death is a necessity rather than the ability to become an officer.

Then he should be enthusiastic, united with many things. Being a pioneer is no longer a matter of sense of self but a greater result, a victory. Then only an inward satisfaction should be more than enough for him. The pawns are dried leaves that are falling off whose deaths give way to fresh young leaves to live.

Pawn is a warrior, in whatever story his fate is not written down. As history has little to say about the existence of small people. But they are the soul of a game of chess, with all the limited ability, the paw often determines the nature and outcome of the game. To then be forgotten.

4 Balasan ke THE FATE OF THE PAWNS